As part of the UK Parliament Week, Dame Anne Begg MP visited Camphill School Aberdeen, an independent charity offering day and residential education care and therapy for children and young people with additional support needs, and met with four members of the Pupil Council with whom she debated Scottish independence, democracy, elections and representation.

Prior to this she met with members of the School’s Council of Management to hear their concerns regarding the National Framework for Residential Child Care and the ramifications that will follow from its implementation. In addition she was shown around Camphill House, where the international Camphill Movement began in 1940, and the much newer therapy centre. 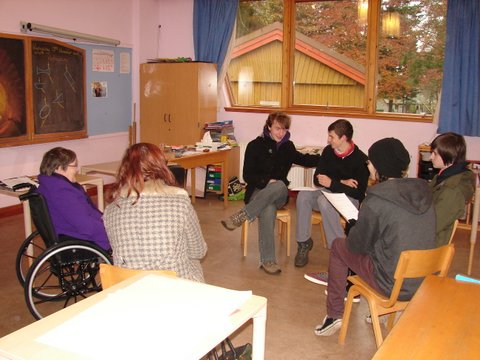 Dame Anne said:  “I have had an interesting and stimulating visit discussing my job as an MP as well as Scottish Independence and other issues of the day. The young people were a credit to the School and all that it has achieved. It was most impressive.”

Klae Russell, Pupil Council member said, “As Government is such a complex thing it was interesting to find out more about the riddle and maze that it is.”